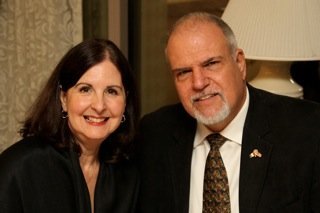 I was born and lived my first 10 years in Toledo, Ohio. I came to Southern California with my parents, as my father had been transferred to Los Angeles by his company.

I grew up in South Gate, California where I attended school, went to church, and played basketball, baseball, tennis, and spent my summers swimming and body surfing. I met my future wife, Marilyn Vergara, in junior high school, and we started dating in our junior year of high school.

I have always been interested in history, and in college, I studied archaeology, and graduated with a B.A. in Anthropology.

After college, Marilyn and I married, and started a family, which included our son Jason, and daughter, Kristin. Along the way, I worked a variety of jobs, and obtained a graduate degree in public policy.

I decided to pursue a career in law, and attended Loyola Law School of Los Angeles, where I received my Juris Doctor and the American Jurisprudence Award for Trial Advocacy.

My legal career began as an associate with a mid-size law firm in Orange County for one year. I then went into solo practice in which I am in my 20th year. Right after going solo, I joined the Garden Grove Rotary Club where I became involved with youth services, especially working with the Interact Clubs at Pacifica and Bolsa Grande High Schools. More recently, my involvement with Rotary has shifted to international service, focusing on working with our sister club, Club Rotario de Cd. Guzman Centro in Jalisco, Mexico. I will make my 5th trip South of the border this year to work with our compadre Rotarians on projects to help in the region.

I have served twice as President of the Rotary Club and have traveled to Korea in addition to Mexico as a representative of our club.

My legal practice, which began as a fairly broad civil practice, is today limited to Estate Planning, Trusts, Wills, Business Succession, Business Planning, as well as Probate and Trust Administration.

I have two websites: www.californiafamilytrusts.com in English, and in Spanish: www.fideicomisos-testamentos.com

I speak on Estate Planning by invitation to various civic groups, churches and organizations. I also maintain a regular blog “Trusts and Estates”: www.tompkins-law.blogspot.com and a YouTube channel FamilyTrusts.

I am an avid hiker and backpacker, and I have made 2 trips to the bottom of the Grand Canyon, once on the 23.9-mile rim-to-rim backpack.