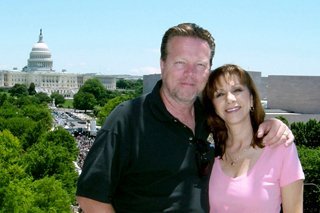 Scott was invited into the family of Rotary just over 10 years ago and has recently had the satisfaction of serving as Garden Grove’s President for the 2009-2010 District year. His tenure proved to be adventuresome as well as challenging in that he had the opportunity to travel on two humanitarian missions to their Sister City clubs that year, located in both Anyang, Korea and Ciudad Guzman in Mexico.

Scott is very proud to be a part of the work that Rotary does in the local community as well, and is probably most passionate about the Public Access to Defibrillators (PAD) program that the Garden Grove Club established several years ago in an effort to combat the mortality rates associated with Sudden Cardiac Arrest (SCA). So far the club has placed 5 Automated External Defibrillators (AED) in and around various public facilities in town. Scott has seen many lives saved over the years by the use of defibrillators in the field and hopes that someday they become as commonplace as fire extinguishers in the home.

Being a native Californian, Scott has spent his entire life here growing up, going to school, working, and serving the communities of Los Angeles, San Diego and Orange Counties. In addition to his involvement in Rotary, he belongs to and serves on several other non-profit and charitable organizations including the Garden Grove Downtown Business Association, the Hoag Foundation, the Strawberry Festival Association, the Historical Society, the Garden Grove/Anyang Sister City Association, the Garden Grove Central Neighborhood Association and the Chamber of Commerce. Scott is also currently in the process of forming the Central County Foundation, a non-profit corporation, the primary purpose of which will be to provide care and assistance to those in need through community services, education and advocacy.

Scott is recently retired from the Fire Service where he spent 35 years working for Cal Fire, North San Diego County Fire and the Garden Grove Fire Department. On his days off he would moonlight as a Realtor, as he now does full-time with his wife Rebecca, of whom he has been married for 20 years. Scott has been licensed to sell real estate since 1978, earned his Broker’s license in 1990 and currently focuses primarily on buying and selling flip and investment properties of which he provides his investors consistent returns of 12% per annum.

Scott’s leisurely pleasures include traveling with Rebecca, video photography, wine tasting and driving off-road vehicles. He loves the challenges, the fellowship, and the good works that Rotary performs towards making the world a better place and hopes to continue to be a part of their global humanitarian efforts for many years. Scott’s only regret is that he did not receive an invitation to join this great organization sooner!